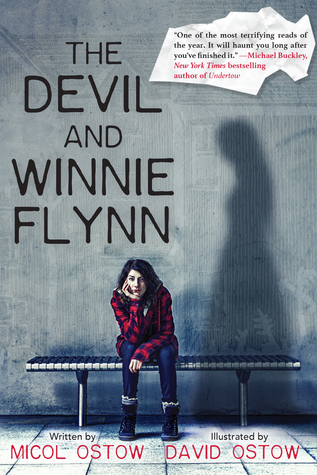 Micol Ostow writes novels about haunted houses, urban legends, and serial killers. But she’s actually a very nice person!  I had the good fortune to learn from her at a writing workshop last fall. And the even better fortune to bring her here for an interview.

My Jersey Devil was based on anything and everything I could find online, which mainly came down to various shadowy winged creatures of varying degrees of fearsomeness. One description I read suggest3d that the devil was a sort of winged dinosaur, which–I mean, if you’ve seen Jurassic Park, you know that’s no good, but it still didn’t inspire much fear, in my opinion. My brother and I were committed to writing a mystery, and since the genre itself was so new to us, we decided the best way to connect to our story was to write about something we *did* know, AKA: New Jersey. Once we focused on Jersey as a location, we sort of backed into the Devil, since it’s one of the most pervasive myths of the state. But since the legend itself was so goofy it informed the tack we took with our mystery–it’s the story of Winnie Flynn, a horror movie fan but real-life skeptical who’s swept up with a reality tv “ghost-hunting” investigation that is, by nature, extremely campy. And it’s only when (spoiler alert) she begins to discover that some of the spirits she encounters may not be rigged for the camera, that the story turns into something a little darker, more sinister.

Another curious aspect of Winnie Flynn is that it’s told in the form of letters from Winnie to her best friend. Why did you choose the epistolary format? Does it enhance the suspense factor? Or is it a way to make the book more accessible and down-to-earth in the face of supernatural events?

I wish I had a clear, thought-out answer as to why the story is told as a running letter! In general I tend to write lots of different genres and age levels and *lots* of different voices: from squeaky-clean aspirational tween to young chapter books, to racy romantic YA “bitch lit.” It’s only in the past 5 years or so that I’ve made a mini-brand of writing dark, edgier young adult fiction. But even with that niche, I’m always coming at the work in a new way, waiting to see how my characters are going to talk to me. In this case, Winnie was clearly talking directly TO someone. Her voice simply sprung, fully-formed, that way. But she was a blast to write, which is why I’m always encouraging my students to take risks and try different voices and points of view. You never know who’s going to emerge on the page!

Let’s talk process: How do you know when you’ve found an idea or concept for a scary novel, that it’s something you want to explore? Do you know right away what age group the concept is suitable for or do you have to work with it a while before deciding?

Well, as I say above, because my writing is so diverse, my process evolves a lot, too. not to mention now that I’m the mother of two small children, I often have to sacrifice the preciousness of a very deliberate process for the sake of just getting words down when I can!

I will say that normally, once a concept grabs me, the general age level is fairly clear–AMITY, for instance, which was a retelling of The Amityville Horror in the form of a Stephen King/Shirley Jackson mashup–was always going to be older YA. Same with WINNIE. Whereas with my chapter book, LOUISE TRAPEZE, I fiddled with voice and age level quite a bit (five very distinct drafts!) because I was so new to the chapter book genre. I had to write that whole story and then step back and determine what age range it was trying to be, and then I had to revise (and revise and revise!) accordingly.

I know from the workshop that you’re a fan of scary movies as well as scary stories. What’s the best horror movie or novel you’ve read recently? Or that you’re looking forward to in the near future?

You’re settling down for a midnight movie marathon. What’s the perfect snack?

What are you working on next?

I’m all over the place! My younger daughter is 7 months old and I promised I would try to take it easy her first year. That has sort of worked. I have the third book in the LOUISE TRAPEZE series releasing in September, and in my “spare” time I’ve been alternating between a picture book, a new chapter book series, and–you guessed it–a YA thriller. Not horror, but dark and twisty. So we’ll see where it all goes.

Micol Ostow is half Puerto Rican, half Jewish, half student, half writer, half chocolate, half peanut butter. When she is under deadline, she is often half asleep. She believes that the whole is greater than the sum of the parts except in the case of Chubby Hubby ice cream. She lives in New York City where she reads, runs, and drinks way too much coffee.